After handing in a list of 4 Sup’Biotech partner universities where they’d like to study abroad, second-year students are left in the dark for months about where they’ll be going in the year ahead, when they will all leave for at least one semester of study in another country.

They can try to find out which country they’re going to, negotiate fruitlessly with the International Office, or attempt to figure out how the selection process works, they all ultimately find out where they will go during the announcement ceremony, where each year the results are announced in a creative and funny way. 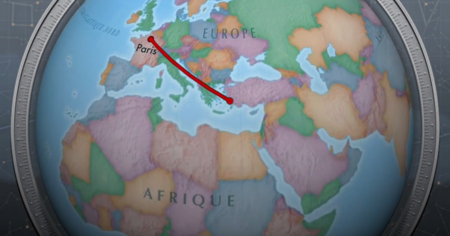 This year, students filled the Sup’Biotech cafeteria to capacity, gathering in front of a projection screen while chatting nervously with each other. As the video began, the tension broke as students realized the unorthodox way the results would be announced: a minute into a music video by artist Stromae, a freeze-framed image replaced the dancer’s heads with the faces of the students who would be parting to Stromae’s native Belgium.

Music videos from Scotland, Australia, South Africa, Taiwan, Korea (a lot from Korea, actually) and many other countries followed, and each annoncement generated applause from the students. After tye 30 minutes of K-Pop, traditional Malay music, and AC/DC–all accompanied by cheers and laughter–were up, the students quickly dispersed to chat, discuss, and compare the results. Some probably considered how they would convince their parents that it’s safe to go to a country outside of Europe. And while many students were not placed in their first-choice countries, there were certainly no “bad” options, meaning everyone was left with plenty of material to ponder as they adjusted to the idea that they would soon be leaving France to learn and grow in another land.