Higher education in France has a few peculiarities that may seem odd to outsiders. The news that the French Commission of Engineers gave Sup’Biotech the ability to bestow its students with the “title of engineer”, which was granted last month, may have been confusing for those unfamiliar with the concept. Terms like “baccalaureat” and “titre d’expertise” may also be strange terms for students getting used to the French way of doing things.

So for those unfamiliar with the website Campus France, you will have to trust us when we say that being officially added to their roster of French universities that they promote abroad is a big deal and a major honor.

Campus France, a website and public organization created by the French government in 2004 to promote French higher education around the world and better welcome international students to France, officially added Sup’Biotech to its network in February, shortly after the announcement that Sup’Biotech had acquired the “title of engineer” appellation for its students. These two major distinctions, arriving on the heels of one another, are the culmination of Sup’Biotech’s rapid rise in stature since its creation by IONIS Group in 2010.

According to Sophie Picavet, Director of International Relations at Sup’Biotech, this distinction will give Sup’Biotech a major boost in its visibility around the world. 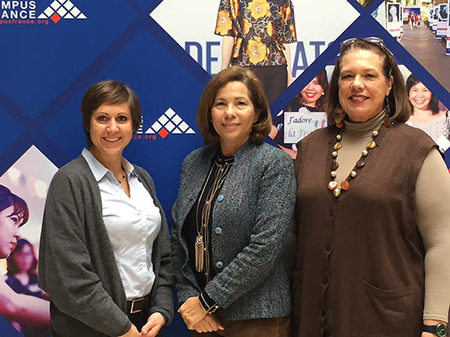 Sophie Picavet with representatives from Tecnologocio de Monterrey, one of Sup’Biotech’s partner universities, at a conference where Campus France’s recognition of Sup’Biotech was announced

“Shortly after obtaining the ‘titre d’ingenieur’ certification, we decided to submit a request to Campus France to allow us to join their network, knowing that officially becoming an engineering school would allow us to have our request approved more easily. This approval means invitations to many international education-related events, both in France and abroad, among representatives and ambassadors from major distinguished institutions. This will also be a chance to be represented alongside Campus France at education conferences.”

“Thanks to all this, we will be able to further strengthen our international development strategy. This is all the more important as Sup’Biotech is the first French engineering school with a 5-year curriculum entirely dedicated to biotechnology. In addition, our international curriculum, which is conducted solely in English, as well as our short programs in summer, will be integrated together on Campus France and easily accessible for students. This will only enlarge our scope of possibilities.”