This year, IONIS iGem, a student group that includes students from several IONIS campuses, is developing a synthetic biology project as part of the International Genetically Engineered Machine (iGem) competition to be held in November in Boston.

The 21-member group, comprised of students form Sup’Biotech, Epita, and E-artsup, among others, is developing a concept that would create an optimized biological solution for direct application to small crops sensitive to temperature changes.

Their idea is to create a thermo-sensitive bacterium resistant to extreme temparatures. It would be capable of responding to changes in temperature and producing substances capable of counteracting the effects of cold and heat. It could thus be used both as an anti-drought and antifreeze solution for plants. 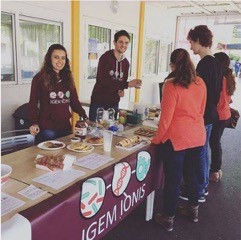 The group is comprised of four teams: one responsible for research and scientific development of the project, one ensuring visibility and financial viability, one working on project modelling, and another working on safety, human practice and design application. A security committee will also be implemented during the “proof of concept” phase.

“The importance of this project lies in its pluridisciplinarity and the opportunity for us to develop skills and experience essential to our future professional life within the framework of an engineer’s curriculum”, the group said in its team presentation.

“The completeness of the project requires a multidisciplinary approach, which is why we also recruit students from other different training schools, such as computer science or design. The ability to make complex and scientific concepts affordable and understandable is therefore paramount. In addition, our data and results are considered ‘open-source’: they are in the public domain, and can therefore be reused by other companies, laboratories, or future iGEM teams, for their projects or to advance research.”